Why Amex Lost a Sale Worth 10% of Its Business 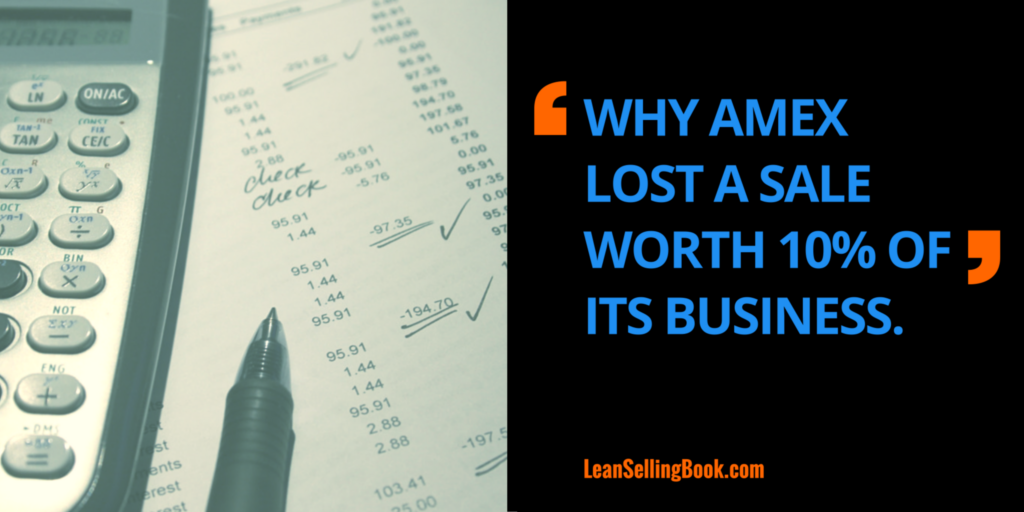 A recent Bloomberg article provides an inside look into the Amex and Costco breakup. The companies announced in February that they were terminating their agreement to co-brand the American Express credit card in 2016. For 16 years, it was the only credit card accepted in Costco stores. What happened?

Amex, like other credit card vendors, gets a “swipe charge.” This is around 2-3% of purchases from retailers like Costco. (Costco’s swipe fee reportedly was much lower). In 2014, Costco felt it could still get a better deal elsewhere. This led first to the termination of its expiring co-branded deal with Amex in Canada. The replacement was a MasterCard issued by Capital One that gave Costco lower swipe fees than Amex was willing to offer. Now the Costco business in the U.S. was up for grabs as well.

The button-down management culture and approach to business at Amex contrasts with Costco’s. Still, that did not seem to get in the way of making the relationship beneficial for both companies.

The strength of this relationship came into question during a conversation between the CEO of Costco, Craig Jelinek, and Amex’s CEO, Kenneth Chenault. Chenault reportedly referred to Amex as a trusted partner, and Jelinek retorted by comparing Amex to ketchup. The implication was that Amex was providing Costco a commodity. And as everyone knows, when it comes to commodities, price is king.

There is disagreement about which company terminated the relationship. It does seem clear that Amex management did not believe it should have to compete on price alone. After all, the American Express brand is over 150 years old. It has a cachet of luxury and exclusivity honed over the years and reinforced with marketing and advertising investments. Wasn’t that worth something to Costco? How did Amex get itself into a situation where it had to compete exclusively on price?

Some will say that is just the way Costco is: cost-driven and relentless about squeezing its vendors. This explanation implies there was nothing Amex could have done to save the account besides competing for a bad business deal.

There is no debate that Costco is—at its core—an efficiency leader in its industry. This drives it to get the best terms from its suppliers. It is also what allows it to provide great deals for its customers. But I think there may be another side to this story.

How did Amex get itself into a situation where it had to compete on price?

As a Costco member, I have observed that Costco does not always have the lowest price on every item in its stores. This is especially true on higher-priced technology items. Yet I do believe that Costco often has the best value for its customers. That value could be as simple as a clever packaging of an exclusive “kit” camera, for example. Including extra accessories can make the package an especially good deal. Then there’s Costco’s return policy, which is legendary. This definitely reduces the risk of buying, which is another important type of value.

That’s why I see Costco as a company that is more driven to provide the best value than just the lowest price. If you accept this view, then it opens the door to a different perspective of why Amex found itself in the situation it did. Whether the ketchup story was true or only a colorful representation of the situation, it does suggest one thing. Costco did not believe that Amex provided enough value to justify higher pricing.

Amex management seems to believe that its brand is its core value. Costco doesn’t see that value the same way. Amex employees were reportedly offended when the ketchup story got around. One can imagine utterances in the headquarters’ corridors, “How dare they compare our great institution to ketchup?”

Unfortunately, that would be the wrong question. The question Amex executives should have been asking is, “How can we add more value for Costco and its customers?” Maybe those discussions did take place at Amex, but I have not seen them documented.

I suspect the decision to cut ties would have been much more difficult if Costco customers were in love with the value the co-branded Amex card provided. But there is little anecdotal evidence of that. The Amex card provided Costco members little unique value other than the convenience of using a credit card. We now know that was not a long-term defensible value proposition for a credit card company.

The question Amex executives should have been asking is, “How can we add more value for Costco and its customers?” Click To Tweet

Companies that lose sight of the value they bring to customers get into trouble. As this story illustrates, value is not static; it is dynamic. Amex’s traditional perception of its value as providing exclusivity had lost, well, its value. My view is that Costco is no longer a client of Amex because the two companies had different views on the value provided and received.

Lean Thinking dictates that the value provided to customers should guide company decisions. This is true for products, services and operations. But the most important aspect of this value is that only the consumer can define it. Costco and its members, not the executives at Amex, are the only ones who can define the value that Amex actually provides. It appears that the relative importance of being a “trusted partner” was not a shared value.

Companies that lose sight of the value they bring to customers get into trouble. Click To Tweet

An acid test for whether a customer values something you provide is whether they are willing to pay more to get it. In this case, it appears Costco was not.

There are three takeaways from this story to consider for your own sales strategies:

If you continue to work on these, you can create a sustainable competitive advantage. These are foundational practices of Lean Selling.

No doubt, this experience has been painful for Amex. After the breakup, it came to light that the Costco relationship represented roughly 10% of Amex cards in circulation. The strategic risk of failing to focus on value carries high potential costs for every organization.

About: Robert Pryor is a Lean Selling author and community builder as well as a CEO, speaker, and educator on cutting-edge sales processes. Follow by joining the LinkedIn Group “Lean Selling” or on Twitter @LeanSelling.

Disclosure: The author does not have financial interests in the companies mentioned in this article.