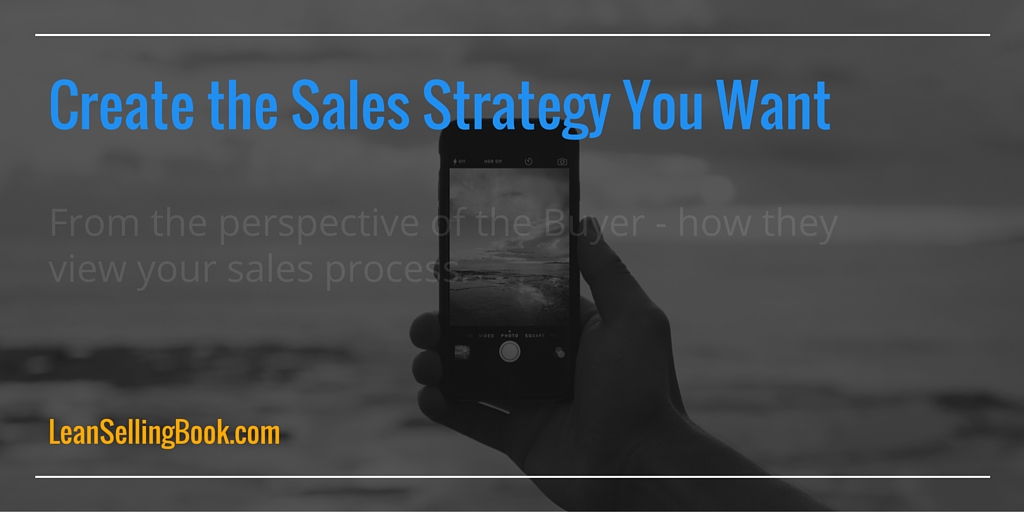 Create the Sales Strategy You Want

Part two: Through the Buyer’s Eyes

Last week, you learned that there are always two perspectives on the selling journey: that of the Seller, and that of the Buyer. We followed Mike on his journey to sell software from his company, Software Enhanced Logic (SEL) to a company that Jim works for, Better Upscale Yarns (BUY).

Mike thought a closed sale was a sure thing, but in the end, he lost to Better Software Products (BSP). With everything that Mike thought he had going for him, why didn’t he win the sale? This week, we’ll follow Jim on the same journey, and look at the same process from his viewpoint. Hopefully, this will shed some light on the sales strategy that allowed BSP to steal the sale right out from under Mike.

Before Jim first heard from Mike, he realized that BUY had a need. BUY was having an issue that he thought might be solvable with specialized production software, but his company was trying to manage their process using spreadsheets. This first step of the buying process is that not only does BUY have a requirement, but they are also ready to take action—they’ve decided that someone needs to do something about their problem. What that something is, no one is really sure, but Jim gets assigned to be the “someone,” with the responsibility to figure out how to address the problem.

Step two of the buying process now begins because Jim is doing research around the problem and potential solutions. He Googles a lot, and downloads a few whitepapers to see if they have information that could help him. This research process tips off SEL’s inside sales team, and Mike gets assigned the lead.

Jim is not sure that SEL can really solve his problem, nor is he confident that SEL is the best option. In fact, he doesn’t trust anyone at SEL to tell him the truth about either of those things. He ignores Mike for as long as he can, instead continuing to look around online, while asking his everyone on LinkedIn he can if they have recommendations.

Mike is busy calling everyone at BUY, including Jim, (even though he doesn’t know if Jim is the decision maker), while Jim reaches out to the vendors that BUY has already worked with before. Unfortunately, his familiar vendors can’t provide an exact answer to his question. Frustrated that no one seems able to help him, he finally returns Mike’s call, still unsure if Mike can really help him, or if he’s just trying to make quota for the month. This is step three in the buying process, actually making contact with companies that could potentially have a solution for his problem.

Jim has found another company that could potentially help, Better Software Products (BSP), but he’s pretty sure they’ll be too expensive. Jim reaches out to BSP to see what they have to offer. He never mentions this to Mike, and it never occurs to Mike to ask Jim who else he has spoken to. 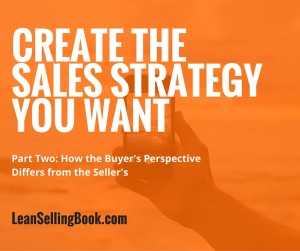 The salesperson at BSP, Jane, cheerfully responds quickly with a call to Jim, and they chat a few times about what BUY needs and how what BSP offers fits. Partly as a result of Jim’s discussions with Jane, BUY figures out how to patch together a temporary workaround. Things are stable at the moment at BUY, even though they don’t have a long-term solution yet. Jim has time to move to step four of the process, trimming down the suppliers he’s uncovered into a short list.

Meanwhile, Jim concedes to Mike’s request for a big company meeting, where Mike rambles on about what SEL’s software does. Jim spends the entire meeting wishing that Mike would spend some time asking what BUY’s most critical needs are and explaining how SEL might help.

Following the big meeting, Jim calls Jane to ask a few questions that Mike’s presentation made him think of. Mike keeps busy demonstrating SEL’s software to everyone at BUY, just to make sure everyone sees just how great the software is. Mike doesn’t ask many questions, and tends to annoy everyone he talks to by asking for the sale at the end of each demo. Unfortunately for Mike, Jim is happy to let him spin his wheels, while he moves to step five of the buying process.

Jim keeps Mike at an arm’s length. He’s learning more about SEL’s software in general, but he’s not really seeing a unique benefit with SEL. It’s less expensive than what BSP offers, but Jim isn’t sure that what SEL provides will be any better than what BUY has in place already as a stopgap measure.

Jane calls Jim every couple of weeks, much less often than Mike. She asks how the workaround is going, and always offers a few new suggestions for his spreadsheet approach that might help. She always ends by reminding Jim that the workaround isn’t likely to last, but she will help Jim where she can.

Jim constantly reassures Mike that SEL is still in the running, and that his BUY just takes a long time to make a decision. In reality, Jim is not at all sure if he even wants to get a software solution for BUY anymore.  Right now, Mike’s biggest competition is actually No Decision—a chronic problem for many sellers.

Jim is happy with the service he got from Jane, but he still feels that BSP is too expensive for his needs, since BUY is able (barely) to get by with their spreadsheets. At this point, Jim has actually reached step 6 of the buying process; he’s more comfortable with the status quo, and is sticking with that rather than making a decision.

Jim lets the quarter go by, never really directly answering Mike’s questions about purchasing, while getting a couple more free dinners. At the end of the quarter, however, someone makes an error on a spreadsheet, crashing the system, and Jim is now deeply regretting waiting so long for a software solution. 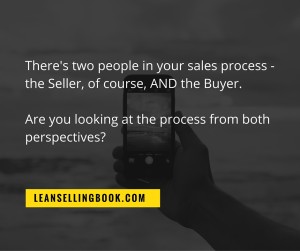 Jim tells Mike he’s ready to buy, but that he has to resubmit the budget request (in reality, he’d cancelled it a month ago, but he wasn’t going to mention that to Mike while he was still getting those free dinners). Since Jim has to submit a new budget request, he decides to reach out to Jane as well. Jim appreciated her help with the early workaround, and she did consistently tell him that it was likely to fail.

Jim realizes that Mike was just waiting for the decision to buy, and now that he’s said yes, Mike stops putting forth much effort to help him.  Mike simply calls every few days to see if they’re ready yet with the contract.

Jane, meanwhile, arranges an in-person meeting with Jim and everyone else involved at BUY. She walks them through BSP’s software, and then spends most of her time answering their questions and working together with them to determine the best solution for BUY. She notes which aspects of BSP’s software would help them the most. At the end of the meeting, Jim is confident to ask his boss for approval of the higher priced software Jane offers. Since the value is so readily apparent, his boss can hardly wait for it to get implemented.

Jim goes through step six of the buying process again, this time making a decision to buy. Jane also has reached step five of her process, but for her, she isn’t treating it simply as a way to ensure payment after delivery. The difference at BSP, and why Jane treats her sales process so differently, is that BSP is using a Lean Selling process. Jane went through each step differently, and Jane treats the final step differently too. We’ll delve into that final step, along with the rest of Jane’s process, next week as we wrap up this series.

By looking at the Buyer’s perspective of this process, you probably now have a few ideas why Jim went with BSP rather than SEL. What Mike thought he was doing was insuring his sale with all the techniques his sales training had taught him. Instead, he was alienating Jim while not realizing that his biggest competitor was Jim’s indecision. By the time Jim realized he really had to make a buying decision, Jane had made an investment in a relationship, and he trusted her suggestions even though her offering was more than he’d initially intended to spend.

Jane spent far less time than Mike did on calls, meetings, or free meals, but she still landed the sale—and for a larger amount than what Mike offered. How do you get your sales team to Jane’s level? We’ll look at just how she did this with the next blog post.